Sharing our finds is part of the fun!  On a Wednesday in May 2014 we met up with UK Expats Karen & Tony and their guest Shelly, filled our cooler chest with the essentials (water, beer, wine and sandwiches), packed our cameras, GPS and Google satellite maps and embarked on another adventure of Cenote Hunting.   What an adventure it was. . . 7 Cenotes in one very long day!  We lead the way in our little VW Crossfox and our guests followed in their mini-van. The first 3 Cenotes Ruth and I had already visited in the weeks prior to this adventure and we were very excited to share our finds. Some of the Cenotes we found using Google Maps and internet research, while others merely by asking around the small villages “Donde esta la Cenote ?”..Where is the cenote? More often than not we would receive a smile and a nod and the villagers would either take us to the local Cenote or find somebody who could. Happy, kind and gracious is the best way to describe the locals that welcome us to their villages.

To start we ventured south of the ruins of Mayapan and located the first Cenote, which was situated within the lands of a small ranch.  The stairs into this “semi-open Cenote” were quite rickety so we did not descend to the water (this time). The view was awesome, with the blue waters gleaming back at us. The caretaker of the ranch advised that this particular Cenote was once frequented by scuba divers, having a depth of 50 meters (164 feet) and clear waters for great visibility.  When swimming in this Cenote you may spot one of the three turtles that currently inhabit it. This Cenote has great cliffs for jumping and when we visit we now setup a fun rope swing. This Cenote offers easy access to the water level and is in a very private surrounding.
(Update: New stairs have been built and the Cenote has been cleaned by SEDUMA “Secretary of Urban Developement and Environment of Yucatan”.  In addition, YucatanCenote EcoAdventures has hired the caretaker of the ranch to maintain the Cenote weekly.) 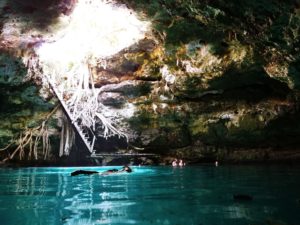 Next we drove through the Village of Tekit, known as the town that manufactures “Guayabera” Shirts. The guayabera is known worldwide as a garment (shirt) associated with Latin America and Cuba and is an indispensable piece of clothing in every Yucatecan man’s wardrobe.  When driving through this village, I urge you to glance into the open doorways of the humble homes. . .almost every one has  a sewing machine whirring along keeping this village alive with activity.
Just outside of this village we stopped for the second Cenote of the day.  We ventured off the beaten path on a side-road that abruptly stopped at a large tree. At the base of the tree was a huge hole.  Peering down the 10 metre (32 feet hole) we saw an amazing “cylindrical subterranean semi-open” Cenote. . . But, how do we get down to the water?  Glancing around we saw a second, smaller hole off to the side.  Up for an adventure… we decided to check it out. Approaching the hole we discovered some makeshift wooden stairs that brought us into a cave that opened up into the larger Cenote. A tree was growing just above the larger hole with a spectacular root system all the way down into the water.  We were so enamored by the beauty of “mother nature” at this Cenote, that we featured it as part of our logo (YucatanCenote EcoAdventures).
Below the water surface was totally black and extremely deep – a sheer cylindrical water cliff down 60 metres (196 feet). While in awe of the natural surroundings, a beam of sunlight pierced the rocky hole in the ceiling and created a laser beam of blue light that went over 100 feet right to the bottom of the cenote, it was truly magical! We call this blue beam of light “Sapphires of the Jungle”
(Update:  New stairs have since been built and the Cenote has been cleaned with thanks of a combined effort of SEDUMA and local dive groups.) 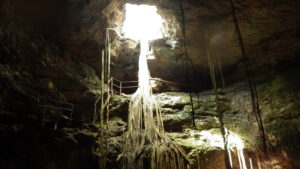 The third Cenote of the day was also magnificent! The stairs were in rough shape and Ruth was too scared to go down as the steps were very steep and no railings at one point. I however, went down ½ way and took photos… but the stairs were suffering so we played it safe this time.  Full of  amazing rocks, colours, stalactites and formations.  We did return to this one a number of times but unfortunately the stairs has since totally collapsed. Rebuilding the stairs may become a future project to reserect this incredible Cenote. 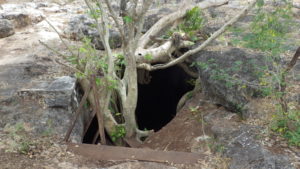 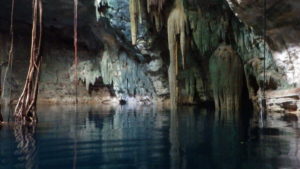 As we approached the fourth Cenote of the day there was a small grass hut / shelter  on the trail, which could have been a ceremonial house for the Aluxe, the mystical Mayan fairies who guard the fields and play tricks on unsuspecting humans OR maybe just a small shelter for a siesta out of the sun…we were having fun speculating on its possible uses. The Cenote itself consisted of sheer rock cliffs in a perfect circle. The was no access to this Cenote’s water level, but a nice photo op for sure. We pitched a few rocks to gauge its depth and did a lap around the circumference to check it out. We were pretty remote at this point with no nearby villages, so this area does not see much traffic. 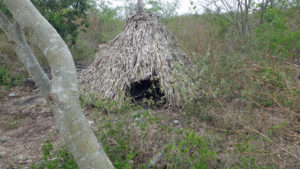 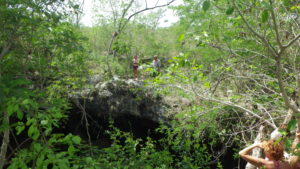 This next Cenote we found quite by accident.  The Cenote was not on any maps or listed anywhere and it was an experience totally different than the rest. This surface Cenote was nestled in lush vegetation, lilly pads and thousands of frogs and plants with absolutely huge leaves.  We felt as if we were in Jurrasic Park!  We wandered around a little and enjoyed the greenery but now we were ready to go even deeper into the jungle…way off the beaten path! 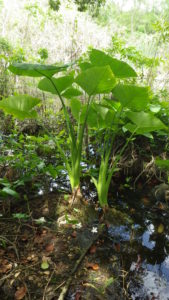 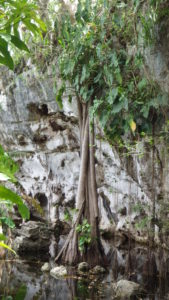 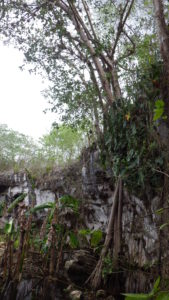 Going deep… We pull out the Google Map, satellite view, to search for tell-tale signs of Cenotes. We have discovered that little black dots on Google Maps in the Yucatan are “sometimes” Cenotes and that, in some cases, there are roads leading to those black dots.  We quickly realized that Google Map’s definition of “road” can be somewhat ambiguous.  Long story short….and it was long….we found ourselves in interior Yucatan on a back “road” which had obviously not been used for years, being overrun by the jungle.  Three times on this four hour “road-system”, we asked our friends (in their mini-van with no A/C … hence driving with the van slider door fully open) if they wanted to turn around, but each time they said “no..let’s go for it”.  We worried about  fallen trees, private property and locked gates, but at the two-hour point in the jungle, the road seemed to dead end at a ranch, in the middle of nowhere.  We nearly lost hope when we noticed that the gate in the fence was open and, after some walking around, discovered that there was indeed a road on the other side of that fence, so we jumped back into our vehicles and continued our journey.  For the next hour the road stopped at four different gates across the road, each time relieved that it was only a rope or a piece of wire keeping the gates closed (no locks).  Take note that the gates are there to divide (or keep together) free-range cattle, and the etiquette is to always leave the gate how you found it, open or closed. Even though “Google Maps” was indicating that we were travelling on Road #8, we joked that it was not a road number but likely the speed limit. 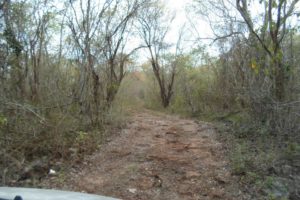 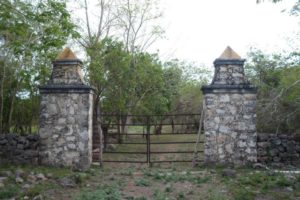 At the three-hour point we stumbled across a conservation area called “Yalahau State Park”, a wetland /lagoon (aka “Aguada” or “Surface Cenote”) or as we called it that day…Cenote number six.  We came up the back way and the local crew working at the conservation area were surprised to see us coming from that direction. The laguna waters were beautiful blue, measuring 800 metres x 400 metres with a maximum depth of 11 metres (2625 ft x 1312 feet x max. 36 ft depth). This particular laguna is the largest body of water in the state of Yucatan.
We asked the workers at the conservation area how much longer until we reached the paved road and they responded 12km (7.5 miles), which would take at least another hour!  Yes, 12km (7.5 miles) in one hour…that is how bad the rocky, uneven, jungle infested road was.  What a blast !!!   The workers also indicated that there were Grutas (caves) and Cenotes along the way. Well, say no more… off we went back into the jungle to continue our search. 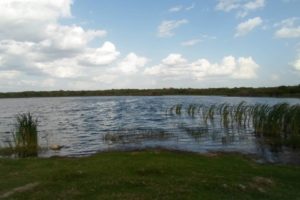 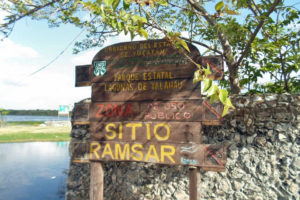 We had been travelling through the jungle for nearly four hours and it would be getting dark soon and there was a chance we would be sleeping in the jungle tonite! But, that being said, we did find one of the sought-after Cenote caves along the way and it was beautiful….with the jungle spilling into the Cenote and refreshing crystal turquoise water.  We were hot hot hot and quickly jumped into the coldest Cenote ever, but so welcoming and refreshing, we rinsed hours of road dust off our aging bodies and spent a few minutes relaxing!  This “semi-closed” type Cenote was located inside a cave, with 16 meters (52 feet) of free-fall (from the rim) and having a maximum water-depth of 45 meters (147 feet).  What was quite incredible about this Cenote, located 97 im (60) miles inland from the coast, is that there are sea urchin fossels on its underwater walls, a remnant of when the peninsula was submerged under the sea! 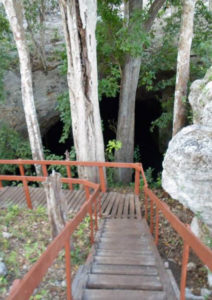 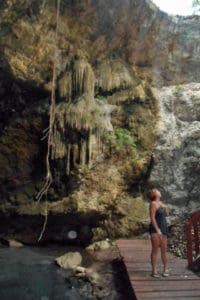 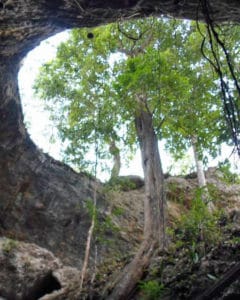 Another half hour after that Cenote we finally hit a paved road with a sigh of relief and a prayer of thanks that we survived!  Um… next time we visit this Cenote, we will go the opposite direction and save hours of driving LOL.

We were concerned whether our new-found friends would ever speak with us again….after the toll their van took on the jungle roads, boulders and constant branch scratches (like witch’s nails) …but they did!   They said that they have had their fill of back roads, for a while, but that they are looking forward to another Cenote hunting adventure together…perhaps in a couple of months or so.

The next day we were so very exhausted and aching all over, from the constant bumping and jarring of the jungle roads.  My wife and I spent the entire day reviewing photographs and videos and put together a small movie which everyone loved.  It was so nice to meet like-minded and adventurous people… truly a day for hardcore Cenote lovers !

Wade, jump or swing into crystal clear, breathtaking water of the Yucatan cenotes.