It’s a hot day in July 2017 and what do we do on our day off work?  We go out exploring, looking for more areas to share with our guests.  Two of our guides, Roussel and Rene were happy to join in on the fun and excitement of new exploration. We had read in somewhere that there were approximately 27-40 Cenotes included inside the ancient city walls of the archaeological site of Mayapan, the political & cultural capital of the Yucatan Mayans from 1220’s until 1440’s, and located only 1hr from our home base . . . a perfect adventure for the day, let’s go and see what we can find !!

We have been visiting Mayapan for several years and have created a good relationship with the operators and caretakers of this ruin site.  To date, we had not yet visited a Cenote actually within the ruin site and we were eager to learn more.   Unfortunately, upon our arrival, we were advised that the majority of the ancient Cenotes of Mayapan have been dried up for several years and there were none with worthy access.  Seeing our disappointment, however, the caretakers did offer us access to Cenote Ch’en Mul, a cave at the base of the main pyramid (fenced off for safety reasons), the Temple of Kukulcan (aka Castillo).   Cenote Ch’en Mul is actually a cave system under the ruin site that the ancient Maya used as an escape route eventually opening up on the “other side” of the fortress walls.  Evidently it takes approximately 4-5 hours to climb and maneuver through this 2+ km system.  Despite the fact that we were not prepared for caving, our excitement and anticipation  overruled and we were up for the challenge.

Roussel & Rene promptly borrowed the caretaker’s heavy wooden ladder and hauled it all the way through the ruins site towards the cave.  With a little bit of maneuvering, we were able to place the ladder at the entrance of the cave amongst banana trees and proceeded down, excited to say the least. 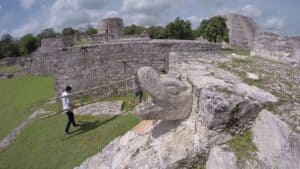 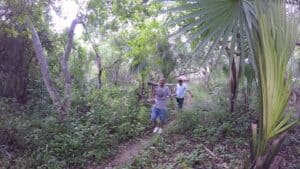 The initial opening was quite inviting and shady, however we quickly discovered the need to squeeze, crawl and slither through the caves.  My personal girth convinced me to stay put, especially after discovering that the “dirt” ground where we were slithering, was “alive” and moving.  Nevertheless, my adventurous Ruth, encouraged by Roussel and Rene proceeded to explore even further through the bugs and bat droppings as I watched the lights of their torches getting dimmer and dimmer and their excited voices getting quieter and quieter.  I found myself alone, bats whizzing past my head.  I am thinking, “we are really not prepared for this caving” and anxiously call out to the rest of the team to come back, only to vaguely hear a response from the distance … “just a little longer” they shouted through the darkness. Ruth was in her “element”!  This is what she lives for.  Despite their need to explore, they soon discover that they were inadequately prepared for this kind of caving and, reluctantly, the crew turned around and found there way back to my light. Full of excitement and mud we reluctantly exited the cave system. 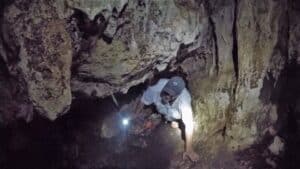 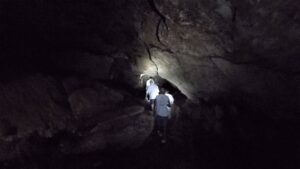 Upon returning the ladder to the site caretaker, we asked again about any other Cenotes within the boundaries of Mayapan and he responded that we “might” be able to take a look at the biggest Cenote within the original walls of Mayapan which currently sits on private land.  We were hot, dirty, pumped and totally exhilarated … yes, we did want to find this Cenote!  We were instructed to visit a nearby Maya village where we could seek the owner of the property where the Cenote sits.

We proceeded to the village and was directed to a humble home where we would find the owners.  Note : There were 4 of us in our small car when we arrived at Mayapan, Eric the local guide decided to join us on the ride to the village so now there were 5. 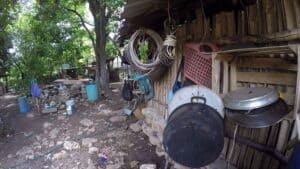 With Roussel and Rene, acting as our translators, were able to locate the Mayan woman sitting on a bench in the park watching her grandson ,she confirmed that her family were owners of the property with the Cenote that we were seeking.  After receiving permission and vague directions ie: go to the curve in the road, you will see a tree, there are two posts, follow the trail until you see a fence. Take the right gate and go a little further until you see a tree.  It is at that tree.  Yeah, um, right, no problemo!  Considering none of us were too confident with the directions… we invited her to join us in our little VW Explore mobile.  She was caring for her grandchild at the time, so she grabbed the child up and we piled into our tiny car (7 of us now! Viva Mexico!)

15 minutes later, we found ourselves parked on the side of the road beside a field.  We exited the car, donned on our hiking backpack (equipped with a caving ladder, ropes, flashlights, first aid etc.),  and approached the family Milpa field, a three-sisters crop consisting of Corn, Beans and Melons. The corn provides for a stalk that the beans grow up, and the large leaves of the melons protect the soil from the scorching Mexican sun and keeps it moist as well as keeping the weeds down.  The crops were ready for some harvesting with melons a plenty growing about, looking like soccer balls. Our adrenaline was kicking in as the woman picked up her grandchild (like a football under her arms) and motioned for us to follow her through the fields towards a paddock and water well. 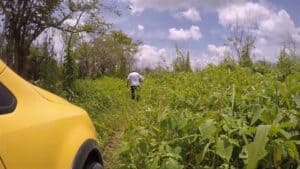 Placing the grandchild  on the ground, the mayan woman pointed down the well and said that there was a Cenote down the well.  We looked at each other . . . we were not prepared to rappel down the well, even though we had a caving ladder and flashlights with us.  She then instructed us to follow her down another path, passing by a  cow skull on a post here and there (warning signs??), and towards a tree atop the entrance of a hole in the ground.  Presto!  Here was another Cenote.  Our local guide promptly paid homage to the Cenote, the Sun and Mother Nature, prior to allowing us to enter the “womb of mother nature” … Cenote. 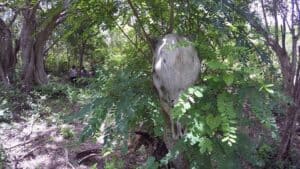 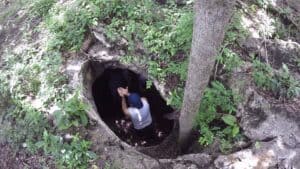 The water surface was about 70 feet below land. With excitement and anticipation, we unravelled the caving ladder, attached safety ropes around the tree and proceeded to semi-rappel down into the darkness of the Cenote.  What a rush!  Our eyes quickly adjusted to the darkness, we lit our flashlights and was amazed as to the depth of the Cenote and the sheer height of the ceiling.  The rappel was slippery and muddy in spots, but it only added to the excitement of the day. 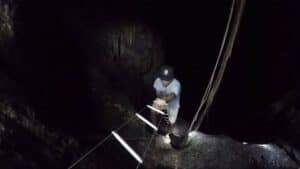 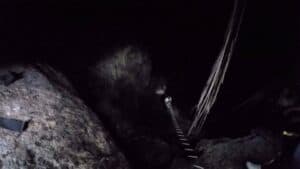 It was a long way down and pretty dark for pictures once we were in the water. We spent considerable time exploring and swimming in this incredible Cenote. It was an honor to spend the afternoon with the Mayan grandmother and she was obviously pleased and proud to share her Cenote with those who truly appreciate the natural beauty and crystal clear waters of these Sacred places. 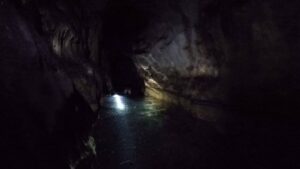 Come and explore with us at YucatanCenote.com Eco-Adventures. 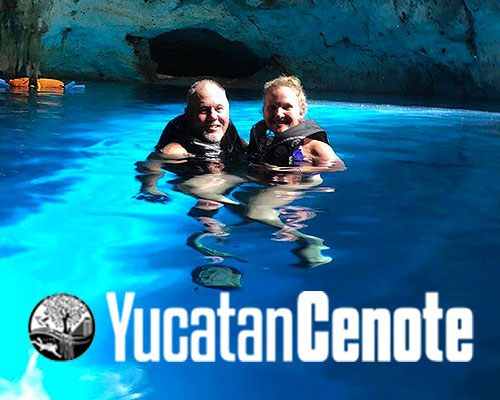 Wade, jump or swing into crystal clear, breathtaking water of the Yucatan cenotes.